Corrade is a multi-purpose, multi-platform scripted agent (bot) that runs under Windows or Unix natively, as a service or daemon whilst staying connected to a Linden-based grid (either Second Life or OpenSim) and controlled entirely by scripts. We like to think of Corrade as a bridge, that gives access to viewer-commands to LSL scripts. Corrade does not stop at providing viewer-commands to LSL scripts but reaches into the Internet of Things (IoT), Big Data and Artificial Intelligence (AI) by implementing the latest technologies and communication protocols. Corrade's target audience consists of programmers that will use Corrade as a building block and then create an end-product.

Scripting templates are provided in the Corrade store that are closer to an end-product yet they are meant to provide a starting point for programmers by illustrating some of the aspects of programming with Corrade. The templates can be changed or created differently (or better) by a programmer that interfaces with Corrade. If a specific targeted application is desired that requires a scripted agent, then chances are that a programmer would be able create one using Corrade.

The latest Corrade is available at:

The latest Corrade RVMs (Referential Virtual Machines) are avaiable at:

and offered in order to have a common point of reference when attempting to reproduce bugs.

The Corrade binary can be executed from the extracted folder directly on all supported platforms. Linux will need the libgdi library to be installed in order to process images. Upon executing the Corrade binary, Corrade will most likely mention that no configuration has been found and that a webserver named Nucleus has been launched in order to perform an initial configuration.

Redirect your browser at: http://127.0.0.1:54377/ on the machine running Corrade - or, access the Nucleus web interface through the network by pointing the browser to http://TARGET_MACHINE:54377/ where TARGET_MACHINE is the hostname or IP address of the machine on which Corrade has been launched. Upon accessing the Nucleus web interface, log-in using the password nucleus.

A configuration form should now load up and the minimal required fields to get the bot connected to the SecondLife grid are the following:

Once the configuration is complete, click the Commit configuration and wait for the bot to connect to the grid. In case the bot is unable to connect, the errors logs can be consulted under Logs/Corrade.log in order to attempt to determine the cause.

Since Corrade is designed to be a long-running process and given power or Internet outages, the contrib folder contains sub-folders for every supported platform with instructions on how to demonize Corrade such that the bot will be able to run in the background. 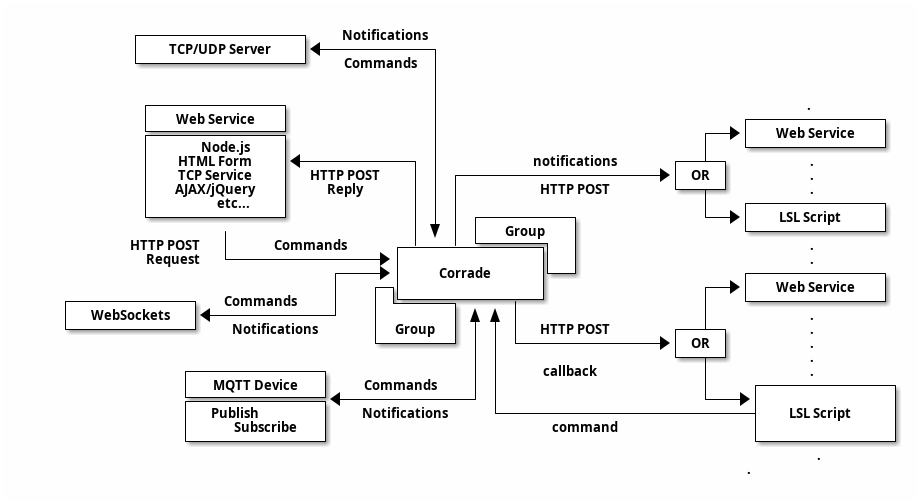 You can find basic tutorials on how to interact with Corrade on the tutorials page.

The application programming interface can be found on a separate page and describes all the commands that can be sent to Corrade along with examples.

You can find scripting templates (that also function as test harnesses) in Corrade's store on the Second Life marketplace:

they are demonstration scripts that could provide you with a starting base for programming with Corrade.

A list of general purpose providers or geared towards usage with Corrade is mentioned in this section.

These hosting providers are known to work with Corrade:

If you need help with Corrade (installing, setting up, general questions), we can be contacted by using the contact page.

If you would like to request a feature or report a bug, please use:

To create a bug report, please make sure to provide a minimal, reproducible and complete example of the problem you are experiencing. This roughly includes creating a test scenario with the following points in mind:

Additionally, please be aware that we barely can provide any support for products that are not made by Wizardry and Steamworks - we cannot take upon ourselves the responsibility of other products and it would be wrong to do so; this includes various operating systems, such as Linux distributions, or "in-world brands" to which we may not even have access to or would require purchases on behalf of Wizardry and Steamworks.

In case you are having a problem with a product that transgresses Corrade, please try to reduce and then reproduce the problem: for instance, in case of in-world products that you wish to interact with Corrade, reduce the problem to a set of primitives that can be re-created easily; conversely, in case of trouble with an operating system or Linux distribution, please refer to the Corrade Referential Virtual Machines (RVMs) for a common point of reference.

Wizardry and Steamworks Project-Closed and Open-Derivatives License 1.0 (WAS PC & OD 1.0)