The eject command can be used to eject an agent from a group. It requires both the in-world power to eject as well as the in-world group power to remove members from roles in order to make sure that the member has been ejected. 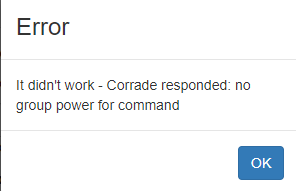 then please make sure that the Membership->Eject Members from this Group SecondLife group permission is granted to your Corrade bot.