You are here: start / secondlife / wanderer

I have noticed that there is frequently a need for a script that will move a primitive around randomly. Initially, I have seen this for animal breeders but later I have also seen robots and similar builds. The inspiration came from birds because I have not seen many bird scripts that move the birds by making them fly higher or lower. They all seem to move in a plane without changing altitude. For that, and other applications, I have made the script below to cover most geometrical areas in which a primitive can move. So far I have included:

For a concise explanation of how wanderer is designed, please see population genetics and selection where we put it to some good use.

The primitive this script resides in sets itself to physical. However, it is suggested that phantom should also be turned on to avoid collisions.

There are several applications I can think of based on the introduction:

In case you want to move a sculpted object, it is sometimes necessary to place the object inside an invisible sphere such that llLookAt rotates the object towards the point it is currently wandering to. Otherwise, the object may not face the destination point. Wanderer also accepts some parameters which you can modify in the CONFIGURATION part of the code.

axis of the invisible sphere must be calibrated so that it is aligned with the perceptual "front" of the object. This is because llLookAt, by definition, rotates the object to point its forward (

) axis towards a given point. This sometimes conflicts with sculpts because it is not always the case that the

of the root prim is aligned with the perceptual "front" of the object.

axis of the object contained in the sphere must point upward. This is because llLookAt rotates the object so that the

axis points downward (or as the specification vaguely puts it, "below the horizon").

The trigonometric functions are decent enough to generate the needed points, however they come at the price of having a cluster of points build up near the centre of the circle or sphere.

The overly cited Wolfram method is to change the equations so that the square root of the radius is taken instead:

However, that is neither proven or explained. In fact, if we do it the Wolfram way, and plot the points, we get an accumulation of points around the bisectrices of the axes: 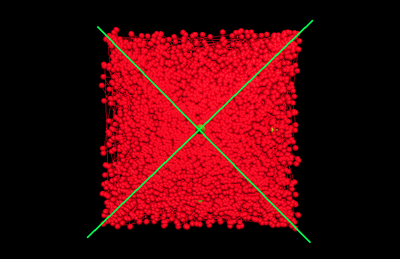 If you have a keen eye, you can observe that the points are clustered around the green lines. This does not happen with the sampling method. 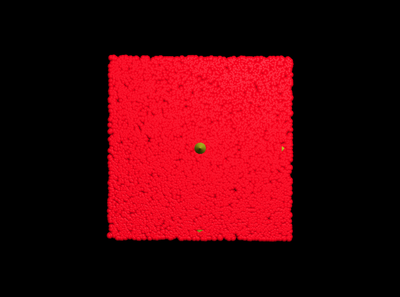 This method is called sampling by rejecting the points that fall outside the bounds of the circle or sphere. The drawback using this method is a slight computational impact: if the randomly selected point falls outside the geometric shape, then a new point has to be generated, hopefully this time within the area of that shape.

The examples use a circle point generator but you can find more generators on the fuss point-generation page.