A definite integral is written

and are commonly used to find the area between the graph of a function and the x-axis.

is a variable and 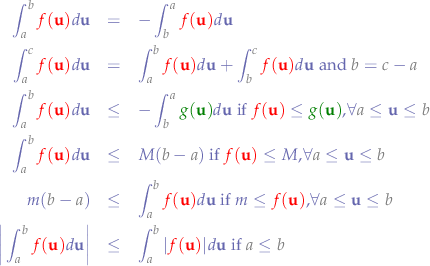 Differentiation is the symmetric operation of integrating:

The convolution of two functions (over the same variable, e.g.

The convolution of two functions is denoted with the

operator and written as:

is a dummy variable.

Here is an example of the convolution of two square pulses

is the unit impulse.

Most electrical circuits are designed to be linear, time-invariant systems (LTI) meaning that the magnitude of a circuit's output signal is a scaled version of the input signal's magnitude. Furthermore, and LTI system that is given two independent signal sources will output the sum of the scaled versions of each signal. Given a function

that causes an LTI system to output

is a multiplicative constant. Given a number of independent signal sources, this gives rise to the concept of signal superposition which allows us to say:

can be viewed as a time delay when dealing with signals in time (i.e. "time-domain signals"). Indirectly, this concept also signifies than an output signal cannot contain frequency components not inherent in the input signal (causality).

The integral of the impulse response and the input square wave stepped through time can be observed in the image above. The convolution equation is seen as the operation is done with respect to

. In reality, we are taking an input signal, flipping it vertically through the origin and determining whether the what the integral is for each value of

which represents in this case a delay through time. Since the output of any LTI system is non-casual (it cannot exist until the signal that excites the output has seen applied), we must step through time to see how each impulse signal of the input affects the LTI system's impulse response - again, achieved by stepping through

For an LTI system with an impulse response of

given the input of

Using the convolution integral, we have to solve:

It only makes sense to integrate between

the signal is applied and both

will have zero magnitude at any time

Now we can calculate: 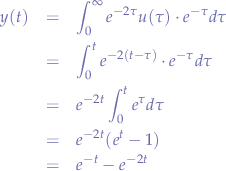 , we can write the output

when fed the input signal