You are here: start / fuss / amiga

Save Window and Icon Positions

Window and icon positions are not saved by default on Workbench. To save the positions you must go to the Workbench menu and select either "Window→Snapshot→All" or "Icons→Snapshot".

Use Workbench as Backdrop

After applying SystemPatch, anti-virus programs will refuse to work. In order to make them work again, edit the S:user-startup file and find the SystemPatch call and append the -LoadSeg argument to it:

Every Amiga keyboard blinks once when switched on.

To place an icon on the desktop such that it persists across reboots:

To set the current date and time and to save it to the RTC (provided that you have an RTC installed), first issue:

which sets the system time (in military time).

After that, save the time to the RTC with setclock:

Run a Script from Workbench

You can create a batch script easily with the ed stream editor. After that, copy an application icon (or any other icon with its type set to app - for example, use the seticontype utility) and give it the same name as your script plus the suffix .info. You will thus obtain two items (in this example, the script name is goodday):

After that select goodday.info and right-click to access the menu and select Icons→Information… (shortcut AMIGA+I). 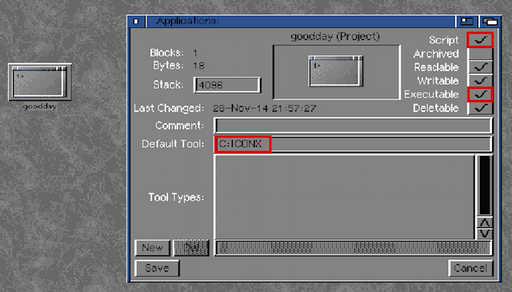 Set the Default Tool: to C:ICONX and tick the Script and Executable boxes. Finally, save the changes to the icon and double click the icon to run the script.

For drives, we have:

in addition to logical devices that can be assigned.

AmigaOS 3.9 boing bags contain a password-protected zip file to store the updates which is annoying in case you want to burn your own ROM and will require you to install AmigaOS 3.9. However, the passwords are listed here:

and you can uncompress the archives using plain unzip.

Under Amiga OS 3.9 SetPatch can be used to turn on disk validation before rebooting. This can be accomplished by adding the WAITFORVALIDATE option to SetPatch in S:Startup-Sequence.

Here is a summary of the various drive capacities that can be used on an Amiga depending on:

Changing the Size of Virtual Devices

Some devices, such as RAM-based devices (ramdisk.device, ramdrive.device), found in the mountlist DEVS:mountlist or DEVS:DOSDrivers/ for Kickstart 2.04 and above can be configured to have a larger size than a floppy disk.

Typically, these devices have the following settings:

such that the formula:

yields the size in kilobytes of the resulting device. In the default case, where these devices simulate a standard DS/DD diskette, the values above compute to 880KiB.

By changing HighCyl, LowCyl and BlocksPerTrack in the mountlist files you can create a virtual device of any size. Suppose you wanted a drive of, say 64MiB (65536KiB), in that case, with a little bit of maths, one obtains:

Now, the low cylinder LowCyl does not need to be set to a high value, the disk can very well start on cylinder 0, such that the equation can be pushed a little further:

With this equation, all the variables can be substituted in order to obtain the value of HighCyl:

Now the mountlist can be modified (or tooltypes changed in SYS:Devs/DOSDrivers/ and the value of the high cylinder (HighCyl) set to 5957 in order to obtain a 64MiB drive. The device configuration for a 64MiB drive will thus include:

In case you get an Intuition requester when Workbench loads, more precisely, whilst executing S:startup-sequence, that says to close all windows then your S:startup-sequence may be printing something to the shell.

All patches and commands in S:startup-sequence are usually ran with a QUIET parameter (or by redirecting output to NIL: via >NIL:) so they do not print out messages or else the Intuition requester will pop-up when Workbench loads before the last EndCli instruction.

Solve Issues with Drives not Mounting on Boot

Workbench automatically mounts drives on boot if the corresponding mount file icons in DEVS:DOSDrivers/ have an entry in their tool-types set as ACTIVATE=1 (or MOUNT=1 for Workbench 2.0). The drives are mounted sequentially via the startup sequence:

such that if mounting one drive fails, then the rest may be skipped. The Amiga can be rebooted without a startup-sequence in order to attempt and mount each drive manually to find out which of the mount files in DEVS:DOSDrivers/ fails to mount.

Getting Adaptec SCSI to Mount Devices on Workbench Startup

The aic78xx.device driver from AmiNET contains few instructions on how to set up the Adaptec SCSI cards. Essentially, the device file aic78xx.device has to be copied to DEVS: and then the executable AicSCSI has to be copied over to C:. Following the documentation, AicSCSI has then to be run from either startup-sequence or user-startup. Unfortunately, that is insufficient since startup-sequence will mount any devices found under DEVS:DOSDrivers such that, at best, C:AicSCSI should be ran before C:Mount Devs:DOSDrivers/~(#?.info).

The issue appears to be related to the Mediator not being properly initialized when the aic78xx.device or the AicSCSI binary get loaded - either by the mount line or by directly loading AicSCSI.

The solution is to re-arrange some lines in startup-sequence, placing C:Mount Devs:DOSDrivers/~(#?.info) after C:LoadMonDrvs. In other words, the correct sequence of commands should be:

and should allow the Amiga to boot and to mount devices when Workbench boots up.

The mixer application provided on the MM CD by Elbox crashes the Amiga right from the startup sequence. Officially, Elbox recommends a third party application such as GhostMix to manage the sound card. Unfortunately, regardless what application is used, the mixer just does not want to remember the settings and restore them on boot.

For instance, GhostMix' documentation mentions the install procedure where GhostMixer should be ran (mind that GhostMixer is a Magic User Interface (MUI) application and needs MUI to be installed) to save the settings, then GMStart is supposed to be copied into C: and called from S:startup-sequence. Regrettably, that does not work and GMStart will just bomb out with GMStart Error and some undecypherable characters hinting to an outright corrupt binary.

To work around all these issues, create the directory ENVARC:Mediator/Mixer:

and only then load up the mixer application (ex, GhostMixer), make the necessary settings and save. In case you are using GhostMix, you can delete C:GMStart since the settings will be restored on reboot.

Ultimately, if all else fails, TaskiMixer seems to work best:

Simply unpack the archive, copy the icon into Prefs/ and TsiMixerInit to C:. Then edit S:user-startup and add the line C:TskiMixerInit at the very end.

The following command installs a bootsector:

to a diskette inserted in DF0: and it is sufficient to make the Amiga boot to a CLI.

The following commands create the C: command directory and the S: startup directory necessary to get Workbench running:

The LoadWB command from C: must be copied into C::

Finally a startup sequence file is created in DF0:s/startup-sequence containing the following commands:

The diskette is now bootable and will load Workbench on startup.

Hyperion Quake 2 seems to be incompatible with the "Joystick monitoring" feature of BlitzBlank such that if BlitzBlank is running when Quake 2 is ran, the whole screen / view will spin around as if the turn left or turn right key is being held down. The result is an unplayable mess with a lot of headaches to debug what the culprit may be: clues would indicate some mouse wheel conflicts since "turn left" and "turn right" are by default bound to "mouse wheel up" and "mouse wheel down", after remapping the turn keys further hints are provided by some random error messages shown in-game by Quake stating that some "joy" button is not mapped indicating that some joystick / joypad signal is being generated and picked up by Quake. Diabling FreeWheel, or MultimediaKeyboardMM does not seem to fix the issue and, as it turns out, the joystick monitoring feature of BlitzBlank is somehow generating signals on its own.

The following file contains a Magic User Interface (MUI) distribution with all the available plugins for MUI bundled in.

To use this package, simply replace the old MUI folder with the folder from this bundle and make sure that the S:startup-sequence file contains the MUI section:

The top-level directory contains a directory named 020+ wherein lies a patch created by RedSkull @ Digital Corruption that patches muimaster.library for 020 or better processors.

The Libs/ sub-directory contains the libraries:

that are not part of the standard MUI distribution and are supporting libraries for the various MUI classes that have been bundled. Since the standard MUI assign (from the snippet in the "Installing" section extends the LIBS: directory with MUI:Libs/ then moving these libraries is not necessary and they can be left where they are.

The Libs/ as well as the Libs/mui sub-directories contain duplicated files for various processors. This bundle by default uses the standard 000 files but in case you benefit from a 020 or better processor, feel free to use a file manager and replace the corresponding files by their counterparts. For instance, for a 020 CPU or better, the Libs/mui/ImageDB.mcc file would be replaced by Libs/mui/ImageDB_68020.mcc.