You are here: start / mangos / track_players_on_map

One of the nice feature of MaNGOS is that it maintains a large database filled with data that can be used in various ways. This project extracts each online player's position in-game, plots the positions on a PNG map and then displays the resulting image. This only works because apparently, the world of Azeroth is flat.

The following map of Azeroth is generated by plotting two online players - one Alliance mage (blue border) and one Horde shaman (red border). The scripts generate this map dynamically such that you can track players moving on the map in real-time. The project currently requires the following:

On each PlayerSave.Interval (mangosd.conf) cycle, MaNGOS stores the position of every character in the characters database in columns:

The position_x, position_y coordinates are relative to the map (either Kalimdor or Eastern Kingdoms) that the player is currently on - this means that they are not global to the entire world.

As such, the image that will be used to plot the players on has to be calibrated in order to establish a relation between the in-game coordinates and the pixel coordinates of the image. We will need the following for both maps - Kalimdor and Eastern Kingdoms:

One way to perform this calibration is to:

You will thus have a correspondence between extreme in-game GPS locations and pixel positions. For instance, the illustration shows various in-world locations extracted with the .gps command and then the corresponding X and Y GPS extremes determined by overlaying a rectangular bounding box for both maps - although that many locations are not needed: 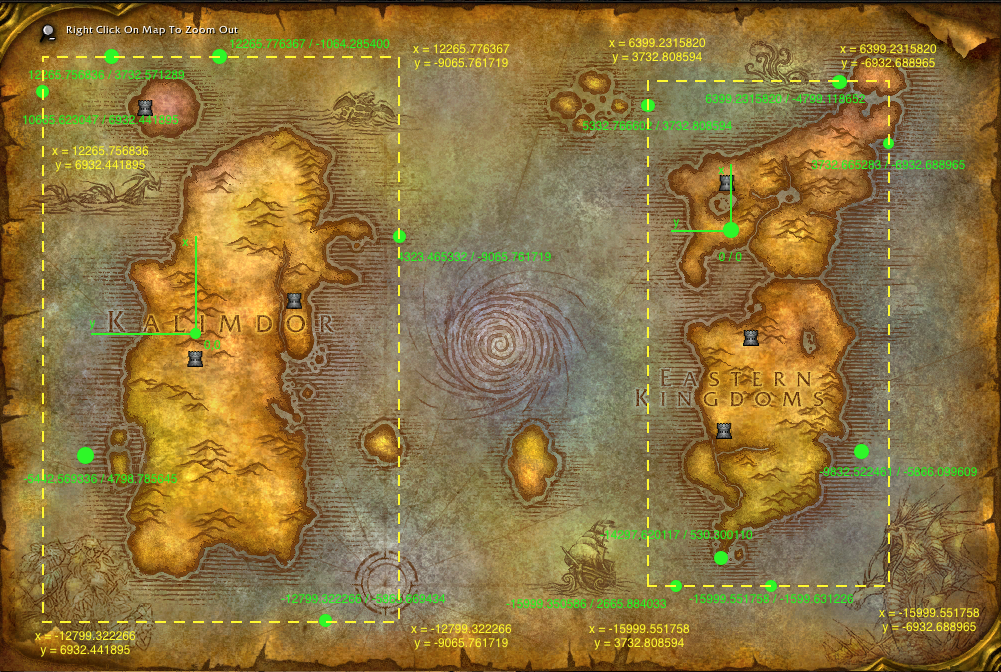 Once you have the extreme X and Y coordinates (top-left, bottom-right), you would determine the pixel coordinates that are found at those locations (visually). Finally, you will obtain a map calibration that can be entered in the config.php file of the project (see $CALIBRATED_MAP variable in config.php).

The bundle is designed to work with MaNGOS Zero (1.12.1). All the files must be placed following the illustrated directory structure:

All the images go inside the top-level img/ directory.

The scripts are configured to update the map with new positions every second however, in order for that to be possible, the PlayerSave.Interval parameter in mangosd.conf has to be set to one second (

It is a good idea to make this change anyway because the default five minutes is too large an interval such that players may not be committed to the database in case the server goes down.