Parallelogram Rule for Addition of Forces

Suppose we have a coordinate system with two points

, then the length of the vector

defines the magnitude of the force

given by the scalar value of

symmetrically the length of the vector

defines the magnitude of the force

given by the scalar value of

The sum of the two forces

can be computed from the sum of the segments that define them.

, then the sum of the two vectors is:

is the midpoint of the segment

The scalar value of

Note that in the illustration shows an ideal case where the

component is zero and forces are applied from the origin (point-mass force).

can be calculated as

this can be generalised to n-dimensional Euclidian space by extending the components of the vectors.

The magnitude of the vector

is given by the scalar 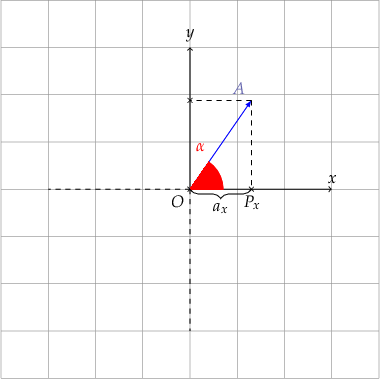 For a vector in 2D defined as:

with the basis vectors:

we can write that:

due to the right angle formed by

. Thus, we can deduce that the angle

Note that the length of the segment

is given by the magnitude of the vector

represents the component of the vector

Let us take a real-world scenario. We want to calculate the direction of the wind in terms of bearing (North, South, East, West) and we know that the measured wind vector is:

For aesthetics, let us presume that the axis

represents North and that the axis

represents East (with West and South in the respective inverse sense of the axis). Now we take the vector

and want to point in the direction of the wind. In order to do that, we perform the calculations above an obtain the angle

and converting to degrees, we obtain:

This means that we have to rotate an arrow, or a pointer, starting from the

towards the axis that we have decided represents North. The result makes sense if you think about it, because the vector

is in the first trigonometric quadrant (more than zero and less than 90 degrees). So, interpreting the result, the wind direction is approximately towards the North-North East.

Given two points in cartesian space

, we want to find the unit vector between those points. First, we establish from which point to which point the direction should be.

For example's sake, let us assume that we want to find the vector that points from

. In that case, the vector is:

In order to find the unit vector, we dive the vector

with its magnitude. In other words:

In order to compute

we can use the cartesian notation of vectors using matrices, such that:

and the magnitude of the vector

is given by the scalar

Using Second Life, Suppose we have two arbitrarily disposed masses in space, the red ball and the cyan ball: 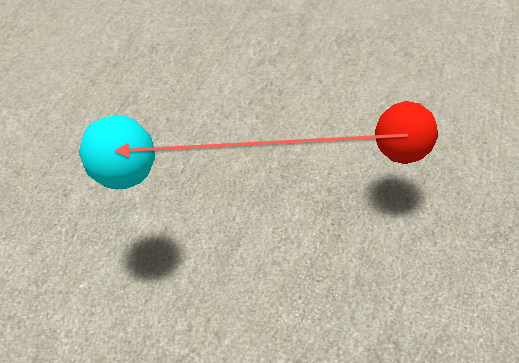 and that we want to apply an impulse to the red ball, such that it travels towards the cyan ball.

In order to propel the red ball towards the the cyan ball, we apply the formulas above as a script inside the red ball. We perform the following calculations in succession:

The law for universal attraction of masses is given by the formula:

As a small application of our cyan and red balls, let us rename both balls to mass and size them so that their sizes are equal. Under these constraints, we can use the following script, placed in both balls to illustrate the universal attraction of masses:

Since we now know how to use the directional vector u from the previous section, we can now set the force as the unit vector u times the force. Since we have said that we will consider the masses to be equal, we can just square the masses instead of doing

and then divide with the distance between them.

The masses do not necessarily have to be the same, however, in Second Life, it is impossible to detect the mass of an object. A different restriction is the force is applied every

which is roughly the resolution that events in Second Life are capable of.

One consequence of the universal law of attraction is the creation of orbits.

Given two masses, the following observations can be made initially:

In the real world, given the lack of constant acceleration, the orbit decays. This can be explained by looking at the forces exerted upon the orbiting object. 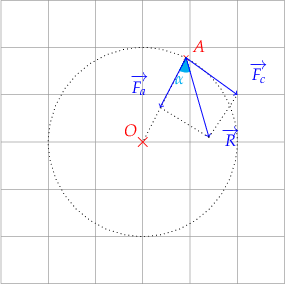 Suppose that the object is in

and that the initial force

acts upon the object, that the force due to the universal attraction of masses is

and that the resultant is

. In the triangle formed by

and if the initial force

is gradually diminished we observe that the angle

becomes smaller such that eventually:

the angle will be

's orbit will decay and eventually collide with object 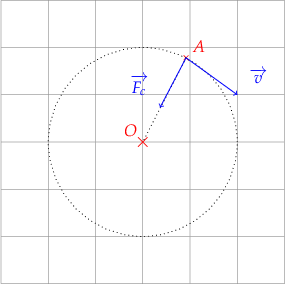 The magnitude of the centripetal force of an object of mass

moving at a tangential speed

along a path with radius of

, the equation can be written as:

where, in two dimensions:

is the change of angle in time. 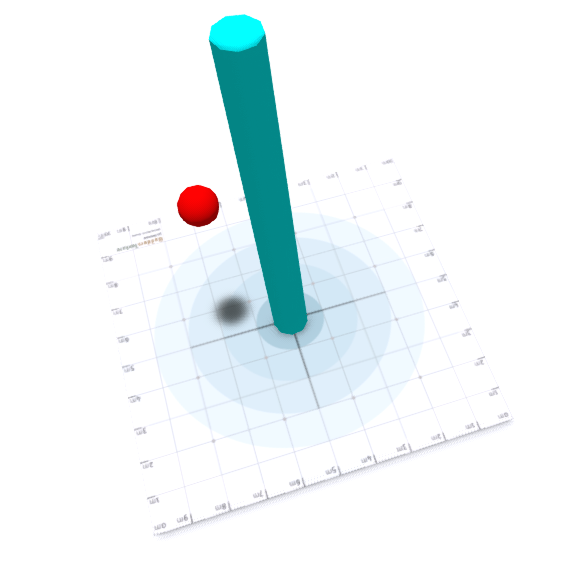 Given a central pole, and a ball that must rotate around the pole at a given velocity (here

), the following script will:

The velocity is favourably selected as being small

. In reality, the centripetal force

is applied all the time and not in

intervals, which, in the simulation's case, makes the ball gradually spiral away from the pole.