You are here: start / fuss / warframe

The build relies on power efficiency cards that make Volt unbeatable when it comes to crowd control. The whole tactic consists in running around, finding energy and then bombing rooms full of mobs. The damage dealt by a maxed out Volt is huge and the overload (with power range mod) manages to reach quite far. 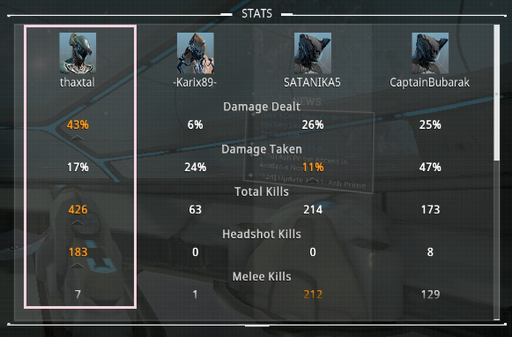 The results are petty good, especially for crowd control situations when you get densely packed mobs surrounding your warframe.

The Windows Sticky Keys option can be enabled in order to keep the Shift button pressed down in order to make the Tenno always run. Turning on this option has no detrimental side effects because the options in the game allow both run and roll to be assigned to the same key.

The trick to pass the 8th mastery rank test is to hold down crouch and then press jump to perform a bullet jump - usually defined as keys C, respectively Space.

The jump provides sufficient lift to raise up to the ledges.

The procedure is to start "Derelict Survival" and just scan the Kavats that appear in the starting area before triggering the alarm. A frame such as Libmo can help keep the Kavats from running around. The procedure is as follows:

When building the Dry Docks in Warframe, the rotation of the room is by default on its side such that two rotations are required for a correct straight positioning.

Alternatively, select the dry docks building and then press M to check the map and the rotation will be apparent - in case the rotation is not correct, the building can be cancelled before any contributions have been made.