can be lowered to a resulting voltage

according to the formula:

The equation has four parameters

such that when three parameters are known, the fourth parameter can be obtained by solving the equation.

for an antenna designed to receive signals with a frequency of

is given by the formula:

For instance, for a

signal, the optimal length will be:

However, since the wavelength can be represented as a sine function, any multiple of

will still be able to pick up the signal efficiently.

Autofire is a game feature that allows the player to flick a hardware switch in order to make the game character shoot at the fastest possible rate thereby alleviating the player's need to mash the fire button repeatedly. Many (retro) consoles do not benefit from a built-in autofire switch. Alternative or addon controllers often had an autofire button.

On all consoles, the hardware buttons are no more than a momentary single press single throw (SPST) switch that closes a circuit and (usually) instructs the microprocessor to execute the corresponding action (ie: shoot).

As such, a circuit can be built using a NE555 timer that will rapidly make the connection between the two leads in parallel with the original hardware button.

For this mini-project, an astable circuit based on the NE555 timer is built:

The formula to calculate the frequency at which the output voltage switches between high and low is given by:

is the time covered for one cycle, high and low:

spends as high) is given by:

spends as low) is given by:

Empirically, a button press by a player on the hardware buttons has variable

Nevertheless, for simplicity, let us assume that the mark space ratio

, meaning an equal time of the button being held down and released.

In this case, the mark space ratio will be

such that we can write

and substituting with the formulas for

for simplicity and solving:

meaning that for a mark space ratio

, the value of the resistor

; in other words, the

resistor is shorted (tersely, the wire itself will imply some resistance that will just be ignored).

should be equal to the CPU clock time because a higher frequency would simply not be perceived by the CPU however, the period

could also be equal to the frames per second rating since a higher frequency could not be perceived on the screen.

In the end, various games accept different button mash speeds such that the period

could be chosen as any value close to the FPS. In this case, let

which would mean that the button will be pressed for

and then depressed for

) and then pressed again, …

That is, taking values for the capacitor

we can obtain the necessary value for the resistor

. For instance, taking a capacitor of

And, as it always is the case with engineering, nobody is going to produce a

resistor, just for you. One can plot . Of course, were the values

to be substituted in the original formulas,

which is not exactly the initial goal of

- but good enough to simulate a repeated button press!

Consoles will definitely not mind variations of the order of milliseconds when it comes to button mashing however, if leeway is to be given, then

Transistor as a Switch

A 2N3904 BJT (base-junction transmitor) transistor can be used as a low-voltage switch in a circuit instead of a relay. The schematic is built around

which is the standard voltage used by most IoT devices.

The value of the base resistor

that must be used in order to run the transistor at saturation can be calculating. Let the following circuit be a guide for the calculations:

We have an input voltage

and the base voltage

using Ohm's law, it is known that:

Substituting, the following relation is obtained:

In order to guarantee that the transistor operates in the saturation region, the base current is multipled by a factor of

Also, knowing that BJT behave typically as a forward-biased diode with an approximate voltage drop of

, it is obtained that

. Now, since the base-emitter voltage

is usually negligible by comparison to the input voltage

, the formula reduces to:

, the following relation is given:

is the DC gain of the transistor and

is the current flowing through the collector.

the following formula is obtained:

, the DC gain of the transistor (

) and the collector current

As an example, let us assume that the device to be powered requires the load current

, that the device should be toggled from a GPIO pin capable of supplying

and that the DC gain of the transistor

In that case the value of the base resistor

The value for the load

can be determined using the same schematic:

Knowing that every load has an internal resistance

and applying Ohm's law in quadrant

can be determined as:

) pin is pulled low, for instance, programatically by controlling the GPIO pin through software, the current flowing between the collector and emitter of the 2N3904 NPN BJT transistor is as low as

which is insufficient to power a device (connected to pins

) is pulled high, the BJT transistor will allow up to

Given the required components consisting in just a resistor and a transistors, various PCB designs can made. Small modules can be created by using a 2N3904 transistor and an surface-mounted resistor using a dual-layer PCB. Larger modules would use a standard long resistor on the base but are still sufficiently small to serve most applications. 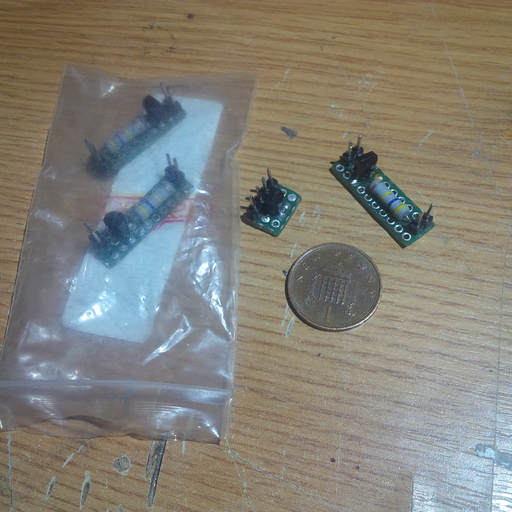 The problem with the transistor switch is that the 2N3904 transistor will not allow a high amperage to flow through the junction such that the switch is best used to trigger digital buttons rather than act as a relay. Under no circumstance should a transistor switch be used to operate mains voltages (

) and apparatus that might require entire amperes of power. For the latter case, a reed relay such as the R1 series from Rayex Electronics should be used instead of a transistor switch.