You are here: start / fuss / hobo_tough_life

The toilet can be removed to inventory and then spawned again in case it gets too dirty such that it will not need cleaning again.

In Hobo: Tough Life a number of structures can be built that can be interacted with. Structures such as the bed, the toilet, the crafting bench, the altars, and so on have to be interacted with directly and they take time to use. While the various structures as used, the temperature drops constantly and the character starts being cold such that the only way is to take breaks and go back and forth between crafting and warming up at the closest fire.

Regrettably, the garbage fire container cannot be moved: it is a static object found-in world and cannot be relocated. This leads to problems since at the current version (0.74) the fire container for the starting base (and others) is placed against the wall such that the distance between the fire and the character is too large and temperature will start dropping.

In fact, at version 0.74, there is one single ideal place where a base could be started. It is located around the corner from the job center: 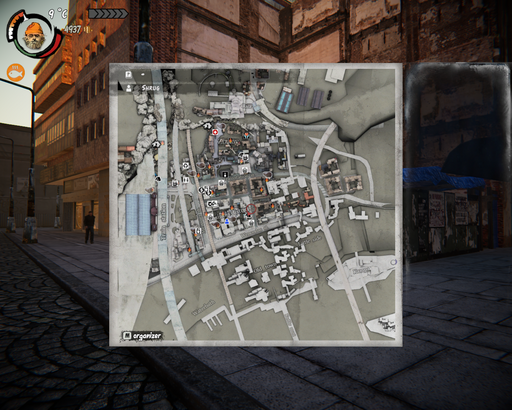 and on the outside: The highlighted point is the only place in the game where a fire container is so placed such that the heat reaches all the extremities of the base. The advantage is that regardless what building is currently used, all buildings can be placed such that the fire extends to all of them allowing the character to work without having to ferry back and forth between a heat source and a structure.

The only downside is that the base is small, however all bases are connected in Hobo: Tough Life, the inventory is shared and the base buffs applies to all the bases. Ideally, the base mentioned above should be a primary base and the other bases used to just build reinforcement components (walls, doors, etc) in order to level up the base bonuses. 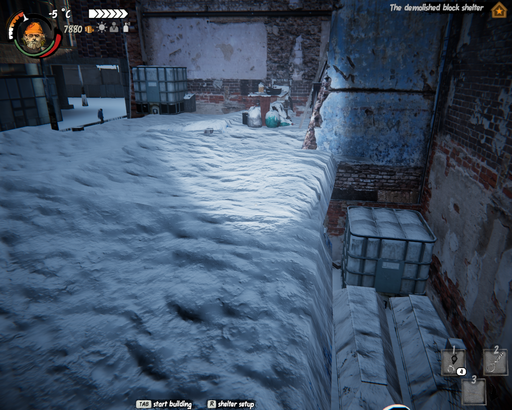 It seems that all forms of cupboards may be placed on the roof such that the roof may be a convenient storage in order to leave more space inside the base for more vital stuff.

Many textures in places that were never though reachable are set to phantom such that they can be passed through.

For instance, next to the pawn shop it is possible to jump on the pipes closest to the fire barrel and pass through the textures.

In fact, most places that have some pipes can be exploited to pass through buildings and then navigate inside the architecture. Shortcuts, as in getting from one place to the other faster by passing through the buildings are possible. Moreover, whilst the player finds itself on the inside of the architecture, locked lockers or garbage cans can be picklocked without having to bother about the police or the owner interrupting.

This raises the question whether there exists some way to escape through the walls that are not phantom. Placing props close to the ground in build-mode does not seem to work, however structures in build mode are phantom and only assume physical properties whenever they are materialized outside of build-mode.

This seems to work perfectly well for all bases where build-mode can be activated - the choice of structure is not as much relevant as the technique that relies on going into build mode and placing a wall or a fence less than mid-way through the player body and then exiting build mode. Once build-mode is deactivated, the structure becomes physical and since the player is a physical object as well, the game has no choice of pushing the player. Additionally, since the wall had been placed less than mid-way through the body of the player, the direction in which the player gets pushed is determinable.

All credits for this method should be given to the dog since the dog is a physical object that often gets in the way and does not allow the player to move, sometimes trapping the player with no escape! :-)